I have never watched a match of tennis. Last night was the first time. Amusing perhaps, that I chose one of the longest matches in history to get inducted. Nevertheless, my partner was keen to see the game and I thought why not? Let’s see what the fuss is all about.

Yes, I know I just saw tennis history and that is unquestionably the focus of the headlines.

What I’d like to muse on however, relates more generally to the notion of professionalism and respect.

The match itself was outstanding. I was positively enthralled. Glued to the match from start to finish. Even I, utterly unversed in the game, could see I was watching some seriously talented individuals at work.

And I choose the word ‘work’ because this is their job. They are paid to play tennis. They have worked unbelievably hard, built their skills, honed their craft, and earned the right to engage with their colleagues on one of the most elite platforms in the world.

Both players gave a jaw dropping demonstration of physical endurance, skill, and tenacity, along with an impressive show of mental focus, strategy, agility, responsiveness, not to mention psychological resolve and resilience. They both know their stuff. No one would argue with that.

Aside from the demonstration of some serious playing prowess and the making of tennis history, however, what we also saw last night – and by way of the contrast between the two player’s styles and approaches – was a demonstration of the consummate professional on one hand, and a shocking lack of professionalism on the other. 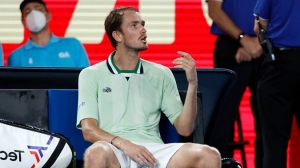 I was appalled during the match to see Medvedev railing at the umpire. During the semi-final he was even more abrasive. Apparently, the crowd are “idiots” and the empire “stupid”. But it didn’t stop there. Then came the presentation. Carrying on like a sulking, surly child, arms crossed, he raised his eyebrows, muttering “boring”, not once, but at least twice, as the Chair of Tennis Australia was actually giving him praise.

Then came his own speech, which was sharply at odds with his behaviour. While his words seemed humorous, self-depreciating and congratulatory, his body language, facial expressions, and the earlier snarky side commentary (that he figured we couldn’t hear, but we could certainly see) all betrayed the unprofessional and unsportsmanlike antics of this supposed tennis champ. 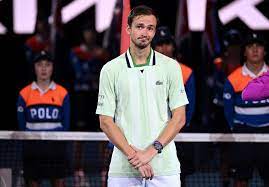 Taken together, and to an outsider like me, the whole thing amounted to a somewhat bizarre spectacle of strangely jarring of emotions. On one hand I was moved to tears by the inspirational story and humble address of Nadal. And I’m not a tennis fan. I’m not really a fan of any sport for that matter. It’s just not my thing. Sporty or not however, there is no denying just how beautifully inspiring Nadal was. Juxtapose this, with the snotty, petulant, and oh so bored Medvedev, and well, one could be forgiven for feeling a roller coaster of emotions as you slide from the high of inspiration to the just plain low of poor taste.

Medvedev’s derogatory and condescending language, along with his petulant, behaviour, betrays an inherent sense of superiority, poor self-regulation, and an immature approach to things when they don’t go your way. What’s worse, he’s at the top of his game, and that apparently makes him a leader and a role model. Someone to look up to.

It would seem he has some work to do.

Now you might say the other player’s coach was breaking rules in the semis. He was beyond tired in the final. He was feeling bitterly disappointed at the presentation.

But does that give you permission to behave that way? To belittle others, be disrespectful and quite frankly carry on like a pork chop?

I can hear many of you saying, that’s the game. That’s how it goes. They’re under loads of pressure. Oh … even better, “he was letting off some steam”. Gee, even the umpire of the semi’s was like “its water off a duck’s back”!

Unfortunately, and call me old-fashioned, but I don’t believe this type of unprofessional and disrespectful conduct is acceptable.

Not in tennis. Not in any workplace. Not anywhere.

No one should ever have to go to work and be subject to the type of communication, condescending and derogatory treatment, and disrespectful and churlishly undermining antics we saw modelled by Medvedev.

In the end, the way we do what we do matters.

We can be the smartest, fastest, strongest. We can be the most disciplined, dedicated, tenacious, and persistent. But if we behave rudely, are disrespectful, condescending and derogatory towards others, well, at best we’re unpleasant to be around and at worst, abusive and toxic. And people like this are culture killers in the long term. No matter what industry they work in.

So, whether it’s your next sporting match, an interaction at your local supermarket, or high stakes in the board room, it’s always nice to treat everyone with a little respect.