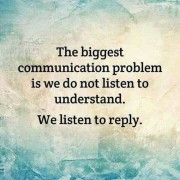 We had a get together with the neighbours over the weekend. The kids ate pizza and watched Toy Story while the grown ups sat out back drinking red wine and enjoying a blather. A few wines in, conversation turned to the Body Corporate and management of our building. Most of us there were, or had been, involved in the committee in some way and were all rather passionate about some aspect or other of the way our home was managed.

I found myself exuberantly bursting in about some thing or other when my neighbour Sara exclaimed, “Let me Finish”.

For a moment I was a little taken aback. Then I realised she was trying to say something, trying to be heard, and I was – whether intentional or not – talking over the top of her. I wasn’t listening.

It’s one of my worst traits. I’m one of six kids. I grew up in a chaotic household where dinnertime debates were loud, exuberant and typically he who shouted loudest got heard. While it armed me with the confidence to speak up and speak out, it left my listening skills lying largely dormant.

My colleague Tom, on the other hand, is much younger than me and far less inclined to jump in and over people in conversation. Instead he sits back. He listens quietly and with focus. Then he speaks up.

It has always floored me, just how insightful and on the mark his comments are. He doesn’t usually say that much. He doesn’t typically say it vey loudly. But what he does say always gets everyone’s attention.

Tom is my example and reminder about how important and powerful true listening can be. And while I have consciously chosen to take a leaf out of his book, the situation with my neighbour is a gentle reminder that it takes constant practice to be truly present with the person with whom you are conversing.

After all, we all want to feel heard.