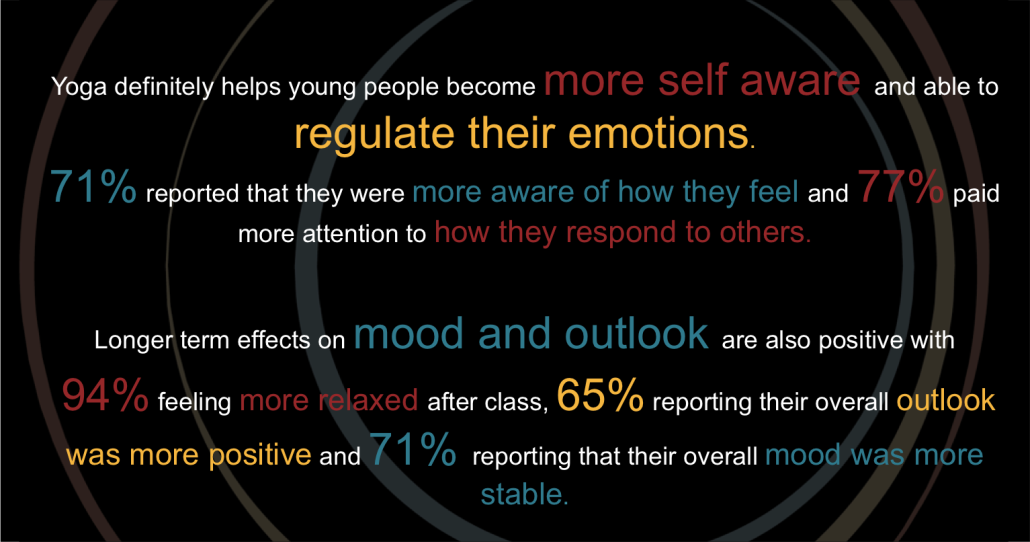 Over the past three months we’ve been teaching a weekly yoga classes with a group of teenagers at a High School in Sydney. Students were primarily female participating in 11 weekly yoga classes based on carefully planned M.A.D. yoga sequence that included:

We surveyed the students at the end of the program to gain some insights into their impressions of the effects of yoga and mindfulness practice immediately after class, but also more generally in their life and over time.

While results were overwhelmingly positive across all key factors, the areas where the practice had the most impact were unequivocal. Students who practice yoga experience very real shifts in their Emotional Self Awareness and ability to Regulate their Emotions as well as positive impacts on their overall Mental Health.

Yoga and Mindfulness are fundamentally about helping people to tune into themselves. Our results here demonstrate that yoga definitely does help young people become more aware of, and able to regulate their emotions with 77% of students reporting that at the end of their yoga practice they felt more emotionally in balance, and as a result of practicing regularly 71% reported that they were more aware of how they feel. Moreover, 77% also reported that they paid more attention to how they respond to others.

When it comes to Mental Health, the results were even more positive. At then end of their yoga practice, 94% of students reported feeling relaxed and 88% reported feeling calm. Longer-term effects on mood and outlook were also very encouraging with 65% reporting their overall outlook was more positive and 71% reporting that their overall mood was more stable. 70% felt like they had choices while 65% also reported that they could calm themselves when feeling anxious, worried or stressed as a result of practicing yoga regularly.

Not bad for just 11 yoga sessions.

Imagine what could unfold with continued practice!

M.A.D. Yoga would love to help you bring these benefits into your workplace, university or school. to find out how, why contact us today. www.madyoga.com.au