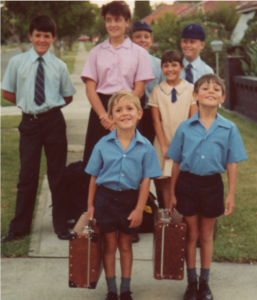 I’m one of six kids. In the pecking order, I’m number four. Technically I’m a middle child. Yet, not only am I sandwiched between four brothers, I even had to share the middle position with one of them!

Growing up was chaotic to say the least and those who shouted loudest or fought the hardest usually won. The prize…well, the first piece of pizza, the most chips, the front seat of the car…the usual stuff kids bicker and banter about.

In this environment, what I learnt was to speak up and speak out. To stand up for myself. To argue my point of view or justify my position. Holding my own against four brothers was no mean feat and I regularly joke that I had the princess well and truly knocked out of me by the time I stepped into the big bad world.

And I got very good at holding my own, asserting my view and articulating my arguments.

In an environment where there were so many of us, vying for whatever we needed in that moment – be that airtime, attention, treats or sweets – what we focused on was being heard, arguing, forcing our point of view and talking over the top of each other.

What I was absolutely woeful at, however, was listening. We all were. In such a noisy space, there was never a pause or a moment of silence. Just lots and lots of noise.

This realisation dawned on me when I was about twenty. I was participating in a tutorial at university. I was so caught up formulating what I wanted to say, that I completely missed what was actually being said by someone else in the class. I wasn’t listening at all.

And this is a dangerous inner world to indulge because it very quickly degenerates into a one-sided conversation – with myself! Not only was I formulating a very one-sided, and potentially very limited, view of the world, I was cutting my nose to spite my face. Without having fully heard and understood what the other person shared, how could I effectively participate in a full and dynamic conversation? What value would my response have, if it did not fully appreciate, encapsulate, and respond to the other persons ideas or point of view?

Ever since then, I have put in a concerted effort to really listen. To be fully present and give the person my full and undivided attention. To try to receive whatever it is that they share without judgment and without being busy inside my head formulating what I want to say in response.

It’s been challenging, because if you’re used to talking, being quiet isn’t such a comfortable place. Moreover, just because I wanted to become a better listener, didn’t mean I was good at it or always got it right. And I still need to put in a concerted effort to listen.

When I met my partner, I showed him the DISC model of Behaviour Styles and we shared some insights from a simple assessment. He ticked an item that went something like “I like to listen”. He was shocked and surprised to see that I had not ticked the same item. I had to explain, that while I really do like to listen to people, the way I’m built and the way I was raised, does not naturally predispose me to listen first and speak after. Rather I’m more inclined to shoot from the hip and just keep talking.

What emerges here is the classic difference between introverts and extroverts. Individuals with extroverted tendencies show an inclination to talk through, or verbalise, their thinking. Those with introverted traits on the other hand, may prefer to fully think things through before sharing their ideas or opinions.

These different modes of thinking and working create the fast chatter that comes from one side, often with people talking over one another, and the silence of the pause on the other side. Those who prefer to talk, find that silent pause excruciatingly uncomfortable and can’t help but fill the space with, well yes, more chatter.

Those inclined to introversion tend to be more naturally reflective. They fundamentally like to listen first, to observe and absorb what it being said or shared around them. Then they like to sit with that for a moment while they process and formulate their thinking. When they do finally decide to speak, they tend only to speak up if they truly believe what they have to say has legs and is worthwhile sharing.

These are admirable qualities that form the backbone of great listening. And the people I have observed most closely through the course of my career, and sought to emulate, are the more introverted individuals who do exactly this.

I find the dynamics of introversion and extroversion fascinating and fundamentally believe that we have tipped the scales in our working world too far towards the extroverted scale – valuing primarily those who speak first, dominate the conversation, or assert their views most powerfully and forcefully. This leaves little or no space for the more measured thinkers and listeners in the room. It also means, if we indulge, and ultimately reward, these behaviours too much, we may be missing some of the best ideas in the room, ending up with a very one-side and potentially limited, view of the world.

We’d love to hear your thoughts on the topic!