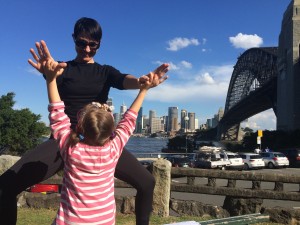 Sleep has never been easy for my daughter. Now that she can communicate, she ardently asserts “I don’t like sleeping mummy. I don’t want to go to sleep. Ever”. She is afraid of sleep. And always has been. Dutifully, I’ve tried to explain the benefits of sleep and the fact that if we don’t sleep we can’t grow, function or even survive.

She has also always snored. Like a trooper. At times as loud as a full grown man. I’m not exaggerating. Even as a baby she snored. We’d raised it many times with the doctor and finally she got referred to a Specialist.

His diagnosis was instantaneous. Chronic tonsillitis accompanied by episodes of sleep apnoea. In an adult, this is manageable. In a child, it is destructive – for growth, mental acuteness and fundamental wellbeing. The verdict. Remove her tonsils within the next 6 months.

While aware of the possibility, we are uncomfortable with the idea of her having an operation. Not because of the surgery. But because of the anaesthetic. It means putting her ‘under’. Some people don’t survive that experience.

My reaction to the doctors recommendation was entirely emotional. I felt fragile and teary. But having my daughter with me meant trying to maintain an outward sense of composure. I concealed the fear for 48 hours until I had some time to sit with it. Alone. On the balcony.

I talk to myself when I have ‘me’ time. Out loud. Yes. Out loud. Call me mad, but I find it helpful to verbalise things as a way of getting them out and off my chest. So I said it. Out loud. “I’m afraid. I’m frightened of losing my daughter”. Then I cried for a while.

What an earth shattering, overwhelming and acutely painful thought.

Then I realised it was just that. Merely a thought. My reaction to a possibility. It had not come to pass. And it need not come to pass. Should I really be spending my time and energy thinking about losing my daughter? Or could I spend it cultivating a more positive outlook?

Distress and angst is so often tied up with the story we create around something, and typically something that happened in the past or something that might happen in the future. It can be so consuming that we miss the potential for positivity in the now.

I will continue to be afraid for my daughter and what might happen as a result of the surgery. But I can choose to work on building a more positive mindset. After all, why would we agree to surgery in the first place if it didn’t offer a sound promise of helping her to sleep, to feel better, to grow and to thrive?

Happy today, to you from me.